The city Riverbank was founded on one side of a river and that is why they name was chosen. Nobody expected that there would be a massive influx of new citizens but the area was attractive enough to convince 3717 citizens to settle in the first years. The riverside developed so fast that there were over time fewer opportunities to find building plots. New citizens and investors demanded to be able to purchase plots on the other side of the river and we liked the idea so that the population grew to 16236 citizens afterwards.

City planners and architects had the glorious idea to set up canals but at first this was not thought out well so that some nearby citizens got wet feet. Of course, we didn’t give up and tried to make it work and the result is that all concerned parties got compensated with a beautiful view from their homes. However, it’s not suggested to jump into the canal because it’s low water and the fall could take a couple of seconds and you would break your neck. To solve this problem, we built a dam. The idea was to increase the water level, but not only this, we also thought about energy generation.

This was an expensive and educational endeavour. There were two tries, not without issues. The first dam was built at the wrong place in the south of the city and architects didn’t make sure that it would work. The result was a dry riverbed and when citizens created the hashtag #gotacanyonnextdoor that went viral, it didn’t take long until media arrived in our city to report about the issue. We refused to give interviews because it was more important to make sure that no citizen would accidentally fall into the deep canyon. A couple of TNT charges on the dam were the fastest solution to sweep the whole issue, well, under the water. A second dam was built at a better place close to the bay in the north because we thought that we could not dry out an ocean. So, what could go wrong?

One day I noticed the fridge was empty, but the grocery store too. I couldn’t find a single product in the shelves and I wondered about the reason when the phone rang and one of the architects told me that they would still try to open the floodgates of the new dam. That was the last thing I heard, because on my way out of the empty grocery store, it hit me. It was a big water wave and my architects were at fault again. The wave did not only swamp the inner districts, the industrial area was hit first and that was the reason why the grocery stores were empty. 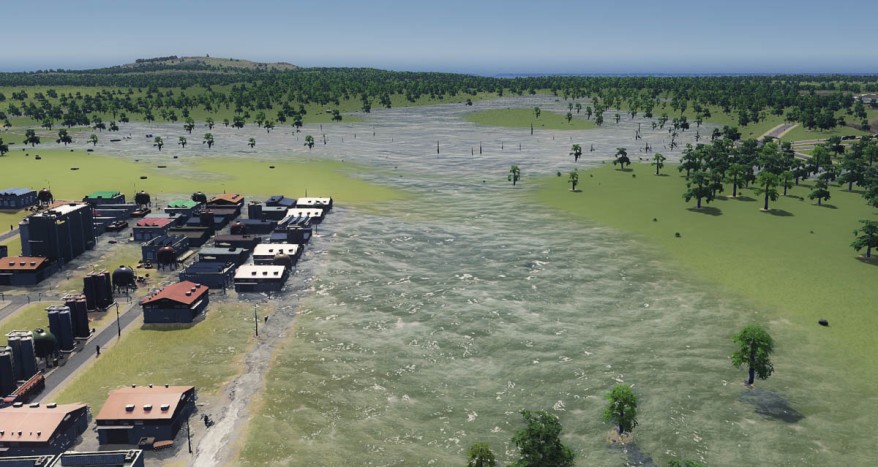 I am still ashamed when I hear people calling our city Riverbanknami because at the end we got the problem solved but this time not with TNT. Yes, the dam is working, and if it wouldn’t, the lights in our street would go off at some point, at least if we manage to convince more people to live here after all the trouble. But that could be difficult because the industrial area was hit hard, and without an industry there will be no products. I do still suggest businesses to come back to our industrial areas because we mastered the critical phase of city planning. But it might take time until they are convinced.

We do however still have another problem. And we can’t get our heads around the issue. There is always jam on the artery of our city. But we do also benefit a bit from it because the media does have problems to enter our city unless they use helicopters, which means we don’t have to answer silly interviews very often. We don’t have buses, a metro or any other alternatives to streets yet. This could be the reason why the main street is jammed 24/7, but maybe it’s also because we built the wrong type of street there, and maybe the wrong type of junction. But once we solved the issue, nothing will stop the growth of the city.