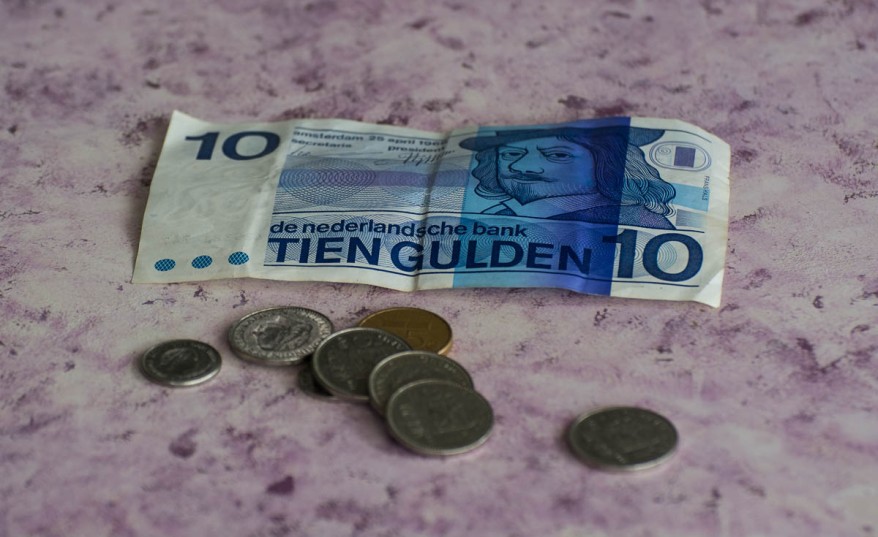 I think it’s time to speak a bit of Dutch. Hemeltje lief! Ik heb wat gevonden, namelijk tien gulden de nederlandsche bank en een paar daalder. Ok, if any person from the Netherland read this, you have my excuse because it’s probably nonsense since I put the sentence together with a German to Dutch dictionary. On the other side, if we forget my basic grammar lessons in school, that’s exactly how I learned English over time. I just translated pieces of what was a big puzzle to me, the English language. So, see this post as my first attempt with the Dutch language (laugh).

But now let’s talk about the photo. My mother has a box where she collected different currencies. Don’t get me wrong, she is no real collector, it’s just that you don’t run to the bank to exchange foreign currencies if you just have a couple of coins or just one banknote. I have a small box with foreign currencies too somewhere in a drawer. I think everyone has, I did at least hear this often from friends. And people often forget that, which is interesting now that the majority of countries in Europe use the Euro currency, including the Netherland.

Because when you find that box again, it’s quite interesting to take a look. In some cases like the banknote in my photo, it’s easy to find out where the money was used. But sometimes you also find coins where it’s not clear. Sometimes you just know it because you’ve been there during holidays, other times you don’t know it because you found the coin or someone gave it to you. In the case of my mother, she also had some coins because a friend of her had a metal detector and they were searching on the beach where some tourists might have lost their own currency in the past.

I don’t know what type of coins you see in the photo above, because I shot the photo one or two years ago. But the banknote is ten guilder (gulden). I shot the photo because I find old currencies interesting, and since I constantly look for different things I can photograph. Money is also great, but a macro lens would probably be a better tool for these photos, especially when it’s about coins. Talking about the Netherland again, I’ve been to Amsterdam in the past and I had contact with their currency because I’ve been there before we all got the Euro currency. I remember that I walked into a Dutch bank with a friend, because we wanted to exchange Deutsche Mark to Dutch Gulden. We thought we got screwed, because the exchange fees in this bank were quite hefty.

But apart from that, our experience in the Netherland was excellent. Quite a beautiful country, and Amsterdam is what I would call the “The hidden Venice in Northern Europe”. No joke, they had so many channels and boats, it was very beautiful. Too bad that I wasn’t into photography, at least not like I am today. If I ever see the place again, I won’t do it with just a single SD card. There are a lot of things you can photograph, and the streets are beautiful. Mobile devices with Google Maps were not a thing at that time, we had zero clue and walked through the streets, literally without a plan. But we found a palace because we heard a crowd, and then we’ve seen a very long red carpet and watched some kind of a royal ceremony. Horses arrived with a carriage, and we thought it was about foreign royals meeting the Dutch royals. I think we saw a princess or so. But we experienced many other things in Amsterdam, I might write about this in another post in the future.

This post here was about the photo and about the old Dutch currency, but what I really love about taking and publishing photos is that they can inspire me incredibly fast. Looking at photos gives me a train of thoughts easily. I often heard about people who started a blog, but they don’t know how to continue, how to find topics. This was never a problem for me, and I really can suggest this to anyone. You don’t have to focus on photography alone, but if you add photos to your posts, they can get your thoughts going! Try that out if you feel uninspired!