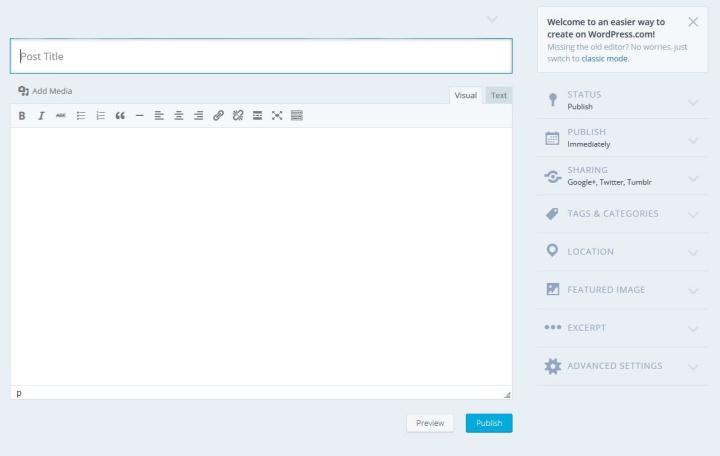 This post here is only relevant for the people who have their websites hosted on wordpress.com. As most of us noticed, Automattic the company behind the mentioned hosting service, decided to change something that worked for most of us. The perfect old editor. Above you can see a screenshot of the new one. 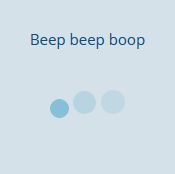 What we got now is a loading screen with a totally childish and nerdy “Beep beep boop” message that we can see several seconds each time we want to create a new post, as it takes quite a lot of time to load the new editor. What we got too is a totally downgraded new editor and it is no wonder that a lot of people are pissed about this issue as you can see here in the forums. To say it right away, if you dislike the new editor too, then please raise your voice in the shown thread of the forum too, as this might help to show them that we are just happy with the old editor and especially that we don´t need downgrades. So, show your rejection if you think the same way.

Until now, the old editor is still there. You either can find the old editor if you go to your dashboard to click on “Posts” and then “Add New” or you click on “Switch to classic mode” if you opened the new editor already. If you go the last mentioned route, it will be saved for a while but the problem is that the classic mode option is just saved as long as you didn´t delete your cookies and cache as it is not stored on the servers. This is a very big issue as many people delete the cookies regularly but several people asked already if they will at some point remove the classic editor completely and the WordPress support couldn´t answer the questions but it looks not good…

Unfortunately, I don’t know the answer to this as nothing is set in stone as we move forward. We are taking all this feedback into consideration to improve the new editor, but whether it will fully replace and permanently remove the Classic editor is unknown at this moment.

But they also mentioned…

The old editor will be available as we work on the new editor.

This looks like they might consider to abandon the classic editor but they are not sure yet if they want to do this. To get this unclear answers, this did upset even more people.

To fully understand what people dislike about the new editor, you would need to quote almost the whole forum thread. It´s indeed a little bit hard to nail it down as there are so many issues with the new editor. But let me try…

1. The “Beep beep boop” message is childish and cartoonish and you have to look on this loading screen for several seconds as the new editor does not load as fast as the old one.

2. Drafts can only be stored offline in your browser but not online as it seems.

3. They removed the word count.

4. There is no spell check button anymore.

5. It´s more difficult to get a short-link now.

6. The panels in the right options sidebar are now closed as default and not opened like in the classic editor.

7. There is not an easy view anymore for categories that are often used.

8. The publish time does not work correctly.

9. The overall design looks as if the new editor is designed for mobile devices rather than desktop PC´s with a wide-screen.

10. The new editor is not integrated into the dashboard as the old one. In other words, the left dashboard bar is not there anymore and that makes the new editor appear unattached from all other wordpress features.

11. In comparison to the old interface, the new one forces you to make more clicks to access features or functions.

13. The new editor messes up links, images and other HTML code and can add spaces when not needed which means there are still many bugs.

14. There is no auto-saving (drafts) anymore in the new editor

15. The small traffic per hour diagram in the top bar has been removed on the new editor page.

16. Admins or editors can´t edit posts of someone else anymore.

17. You can name links only by HTML code.

18. Photos are small size by default and not large.

20. Categories are sorted alphabetically and there are no child categories in the panel anymore.

21. There is no full-screen button in the HTML editor anymore.

22. Not possible to go to Media Gallery via “Set Featured Image”.

23. Preview an article in the new editor will open a pop-up rather than a new tab.

24. There is no scroll-bar inside the editor.

25. Most-used tags are not there anymore which forces you to scroll through a big list.

26. Modules can´t be moved anymore as in the old classic dashboard editor.

27. The new editor does not warn you anymore if you want to close before saving.

I think I forgot to mention many points but still this is quite a huge list apart from the fact that many people think that the new editor is visually annoying and excluded from the dashboard and several other important functions. The whole design is a mess, buggy and many things have been removed. I just can say it again, if you think the same way, do tell your opinion in the related thread of the forum. It will be a deal breaker for a lot of people if they remove the classic editor and if they force us to use the downgraded new editor.

The problem mentioned by many people is that the old editor just worked like a charm and the usability was pretty nice. A lot of people wonder why there is need for changes for something that worked very well. It upsets even more if you read “Welcome to an easier way to create on WordPress.com!” in the new editor while this is not the case.

I can understand if some people mention with sarcasm that the developers or the wordpress team must have gone mad. It´s everything else but not easier to create content with the new editor. It´s an ugly and annoying design with zero usability and a total downgrade. I can understand if people are upset because I am too.

Nobody did ask us, we are forced to beta test a senseless new editor. As mentioned, there are still workarounds to open the classic editor but this results in more clicks. I am somewhat annoyed by all this which means my post frequency will heavily slow down. I go even so far to research about other hosting companies because if they force the new editor upon us and if they remove the old editor completely, it´s likely that I will leave wordpress.com to switch to self-hosting to enjoy writing with the editor that always worked in my opinion.

For now, I just follow the mentioned thread about the issue and watch what will happen but it might be that I meanwhile explore other options like different hosts because it´s a major problem for me if they force me to use tools that just got downgraded.