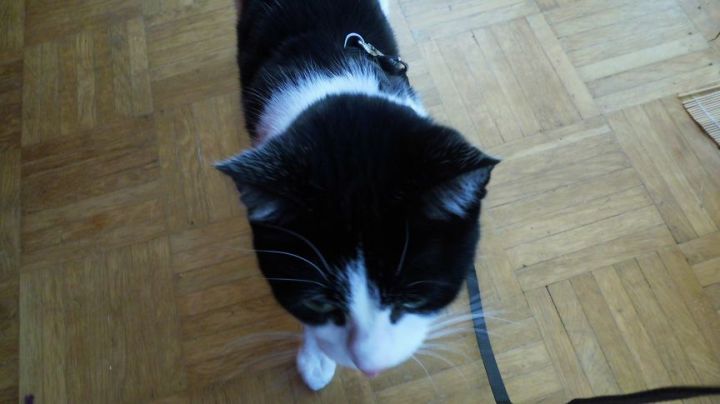 Last year when my mother and her husband got their garden parcel, I eventually got the idea that it would be fun if my cat Shyna could enjoy it outside too some day. The only time she was outside was when I got her, because I bought her on a farm and I could imagine that they did let the kittens out in the garden there. Apart from that, she saw the outside when I brought her to the vet. But other than that, she never has been outside which means she is a pure house cat and lives in my apartment.

When I got the idea to show her mom’s garden, the summer did already end. But I told them what they would think about the idea and they said “Sure, why not, but not if our dog Billy is there”. Shyna and Billy are no friends. My mother visited me once with her dog and we tried it, but Shyna immediately wanted to attack Billy. Fortunately my mother did stand in the entrance room of my apartment, which means I closed the door to my living room fast enough that Shyna couldn’t attack Billy. We tried it again once in a while but my cat does not like the dog of my mother. Billy wouldn’t even have a chance as he is smaller and slower than my cat. So, having them both in the garden, wouldn not be a great idea.

Today I was shopping and found a special cat leash, a cat harness. This product was quite cheap, I didn’t even pay more than 2 Euro. The leash is made in China and I don’t want to say that all Chinese products are bad, but in my experience there are quite a lot of cases where I found out that a German product does have better quality (material quality, workmanship). I thought the leash couldn’t be a problem but the plastic clasp of the harness could be an issue as same as the metallic clasp on the leash. I messed around with this thing to feature out if this is tear-resistant and was afraid that I could damage it in the shop, however, the parts appeared to be very resistant to the forces. I did end up grabbing the bargain as it seemed to be one of the good Chinese products.

Even if the garden is bounded by fences, we didn’t check every single small corner behind the bushes. Even dog of my mother did disappear once through a small hole in the fence that they closed after it happened. They fortunately found Billy not far away from the garden but that was luck due to the fact that he is old, fragile and too small to discover all kind of places in our city. However, even if I would proof that the fences are ok, I wouldn’t let my cat off the leash. She is smart and sporty, and I do believe she would like adventures, and a garden fence with some bushes is in my opinion not really a hurdle for a cat.

It’s still too cold her and we don’t go often to the garden. I planned to take my cat with me to the garden in the spring or summer time. That means I didn’t plan to buy a leash that earlier, it was pure coincidence that I found a good one that cheap today. What makes it great too is that I now can practice with her. She was never on a leash and I didn’t know how she would react. I wanted to practice it with her at home since it’s not garden time yet anyway.

That’s what my post is about today. She was very curious when I opened the wrapping. She always is curious about wrappings, and today I used her curiosity and implied with my voice that it is something for her. I have that special voice tone when I do so and I do mention her name, that means she became even more curious now. I also had her favorite treats to show her that we will have some fun now. I started slowly and put the leash on her.

It took me not too long to understand how it works, but I had to feature out how much I must open the collar part and the thing that I need to attach around her ribs. You don’t want to strangle your cat. Several tests and she became impatient with me. It made it more difficult but I could convince her with her favorite tasty treats. After some minutes I had the cat harness perfectly adjusted on her body and did clip the leash on it.

I was surprised how well she accepted it then. To be honest, I was extremely surprised how well she does understand the leash. She really noticed when she has to go with you and I did run with her from one room to the other and asked myself why I practice it with her if she does accept and understand it already. I believe it was also about her treats, because I use her favorite treats when ever I want to teach her something as I mentioned quite often on my blog. That means, she probably understood that this is yet another new game. I know when she has fun, and it seemed as if it would be a funny new game for her.

After the training we took some photos that I want to show you now. I will do this now once a week with her, so that she will understand that the leash is not strange but something very normal. At the end it is just good for her because then she can enjoy it outside in the garden too some day when the weather becomes better. I really want to show her how it is to put the nose on a flower, to walk over the lawn, to see all the flies and other insects and so on. Though, I am a little bit afraid that she might moan after that experience when she is back home, that she will moan a lot to get back outside. I also should shower her after we did that, because she might have insects in her fur, I am especially concerned about ticks. However, it’s still some time until then. As promised, her are some photos we took today after testing the leash… 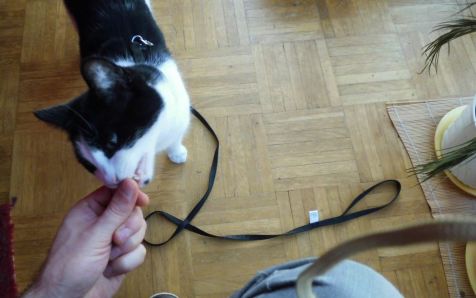 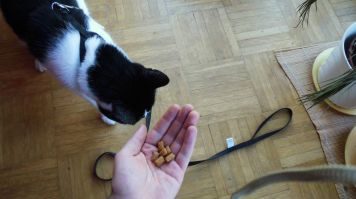 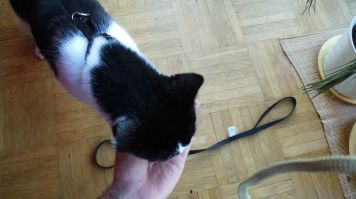 20 thoughts on “Cat Harness Training – Shyna On A Leash”