But the first issue was to get decent knowledge because when it’s about mechanical keyboards, it’s basically about deciding what type of switches you want to have below the key cabs and each of them come with a different feel or features. The different switches are named after colors, and when you remove a key, you can actually see the color and the switch. After some research I knew that typists prefer blue switches because they’re very tactile and clicky, I mean really, it feels a bit like using a type writer. But the clicks are kinda loud and while I liked the feel of pressing the keys, I thought I wouldn’t be able to play games with it nor did I think that I could bear with the clicky sound of the keys for a long time.

Gamers usually go for red switches because they are very linear and good for moments where you need fast reactions. That did put me into a bad spot because I am somewhere in between, I am both typist and gamer. Fortunately there are many other switches and I found out about brown switches which are still tactile but not as much as the blue ones and also not that clicky. The brown switches are basically somewhere between the blue and red ones. I went into different stores to test all the options and it felt really great to write on blue switches but it was absolutely horrible to write on red switches because there was zero tactile feedback but actuating was easier because of that. But when I tested brown switches, it was really like they were made for me.

I did put an Ikea desk together some weeks ago but I write about this another week. I just mention it because I did put some RGB LED tape behind the bench which is pretty cool because my new desk is now lit if I want it and I can change the colors or brightness. My computer mouse is RGB too but my old keyboard wasn’t. So, I liked the idea to get myself a keyboard with RGB feature as well. Another point was that I like minimalist keyboards where there is not much fancy stuff on the outside or wasted space. What I mean is, there shouldn’t be anything in front of the space bar nor should there be any material after the F keys. That’s how my old keyboard looked and I wanted that my new one is as minimalist. Now I had a decent idea of what I really was looking for.

As usual, there are two issues when you know what you want. First, you won’t have much choice. Second, you might need to be ready to pay a premium price for your demands. But given that mechanical keyboards are much more high-grade than membrane keyboards, and the fact that I use the keyboard a lot, I was ready to pay a bit more. At the end I just found three or four products that would have all the features I was asking for. Most of them with a pretty hefty price tag. I eventually decided for the Ducky One 2 RGB with brown Cherry MX switches and I ordered it on Amazon for €175 although I still had €100 on my Amazon account and I didn’t know how to use them anyway. I told myself that I would just have to pay €75, but that’s probably how I did sugarcoat the price (lol).

Last issue was that we had holidays and Amazon showed that I wouldn’t get the delivery before January. Fortunately I got it today and I was pretty excited to open the package. I already replied to some emails, I had a chat with a friend and now I wrote this post here. And I absolutely love to type on the brown switches. Before I got the keyboard, I was still worried that the brown switches might not be right for me but I totally nailed it. This is exactly the feel I was looking for. I also love all those RGB options and the fact that the keyboard is made to survive wars. By the way I am super picky when it’s about keyboards but after using it for a few hours, I can already say this will be my dream keyboard. A friend who is using mechanical keyboards as well said “It’s ironic that we often build high-end PC’s but our keyboards have been the cheapest part you could find”. I personally think he is right, if you are PC enthusiast, you should get yourself a high-quality keyboard as well, because you gonna use it every day. That’s also how I justified it. It was not easy to make that decision, but now I am absolutely happy about it. 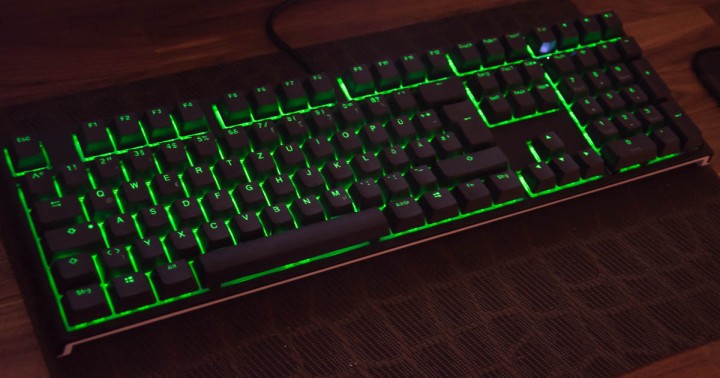