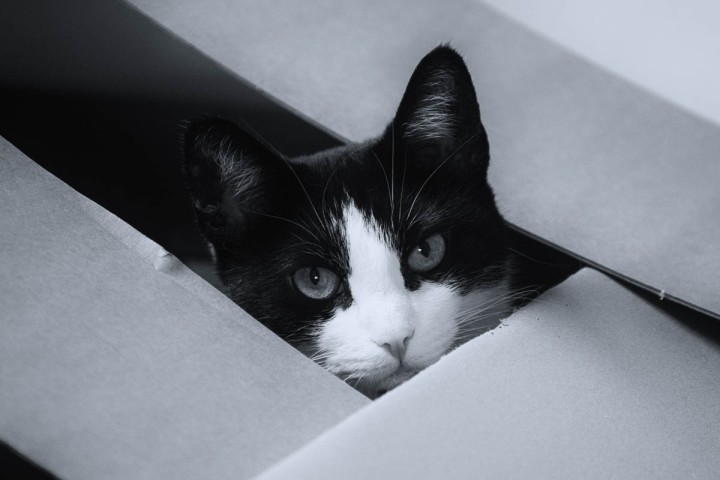 Usually, when I show a photo of my cat in a cardboard box, I am probably happy about a delivery I got or a purchase I made. This time it’s different, I just needed a fitting image with a delivery box, and when I saw the photo at the top in my library with my grumpy-looking cat Shyna, I thought “Yeah, this photo is appropriate because I probably look equally grumpy right now”.

Last year I’ve had several issues with my package deliverer. I won’t mention all the cases now but one example so that you can get an idea. For example, I ordered something for almost €1000 and stayed home as the tracking app said it would arrive that day. I was on the computer and played a PC game to waste a bit of time until the guy would ring on my door. Meanwhile, I refreshed the browser with the tracking URL every hour, and then there was an update that said the package was delivered to my name a half-hour ago. I went down to the mailbox to see if I got a notification that it was handed over to a neighbor but no, nothing was there.

In the evening I got the idea to ask my neighbors if they got anything and after the fourth neighbor, one did say “Yes, here it is, have fun with it!”. I was upset and called the deliverer but gave up on the long waiting time to get through and told myself “Screw it, you got your package, don’t waste your time in the hotline”. But the thought about the fact that a package with a value of almost €1000 could end up anywhere, without you getting notified where exactly it is, was still upsetting. I saw the delivery guy in my street the next day by coincidence. I walked over to him and confronted him with what just happened. He made a repulsed facial expression and replied “I don’t think so, you got it from me”. I went ballistic and said, “Are you fucking serious, dude?” and explained that I was at home, that I had no notification in my mailbox, and all that, but he still denied it. It made no sense at all to talk with him, he didn’t admit it and felt caught out.

I probably should really have written or called the delivery company this time. And honestly, I attempted it but yet again didn’t want to waste my time. Looks like the corporate strategies to make a contact very difficult seemed to work. No real possibility to contact them online, hours long queue if you attempt to contact them via phone. You just give up. So, I did let it slide. You know things can happen and if this guy would have admitted it, I would probably have said “Ok fine, but can you please do it right next time, the package had value and I had to find out myself who received it?” and things would have been ok. I really thought the guy wouldn’t keep doing his job poorly. But here is why I am upset yet again!

I wasn’t at home today. I came home in the evening. A neighbor did ring on my door later and asked me to hand over his package. I was like “What? Which package?” and “I just came home?”. He then said that his Amazon package was delivered to me. I was like “Ehhhh, no?”. He was equally confused now and showed me his smartphone screen and I clearly saw my first and surname as delivered in the tracking application. I told the neighbor that I definitely don’t have his package and told him a few issues I had with the delivery guy in the past. I was pissed and told the neighbor that a certain point is reached because now the delivery guy makes me look stupid or like a fraudster. The neighbor was friendly and said, “Don’t worry, I believe you for now”. I repeat, he said, “for now”. I didn’t elaborate on that but we ended the talk here.

But it did upset me a lot, looking stupid myself for someone’s mistake or tricks (too many packages, taking some back to the depot for another day delivery, tricking the scanner). I went straight to the police station and wanted to file a complaint against the delivery man. Not only is this slander, saying someone else accepted a package if he did not, is is in my opinion fraud too. Imagine the possibilities if this would be allowed. As a delivery man, you could basically take all packages home and say neighbors on your tour received them. Too bad that we don’t have to put a signature on the scanner anymore since Covid-19 because then we actually would talk about forgery here too. You know what the policeman told me? I should call the delivery company. Yes, I will for sure do it this time, going to waste my time on a hotline. I have nothing better to do. No, I am going to catch the delivery guy the next few days and will have a conversation with him, that is what will happen. I still asked the policeman again how this delivery man can just claim I accepted a package, without any real consequence. The policeman understood why I am upset but told me again that I should call the delivery company first and solve the issue with them.

Yes, sure, no one is dying, compared to all the bad stuff happening in cities, this is probably a small problem. But it’s affecting me and back then in the good old days, the police also helped to solve stuff like that, but now nobody has the time. Not the police, not the corporation you have trouble with because they do their best to make the contact difficult like every other imbecile capitalist corporation. You know what, I am way too depressive for this shit. It might just be that I won’t give a fuck either. It’s not my package, the neighbor will find out where it is, point. On the other hand, things will just continue with this guy, so what will happen next? I’d like to get him into trouble with his superior, but you know what I mean? Do I really want to sit in a 2 hours hotline queue with the result that you will get booted out of the line after two hours with a friendly robot voice “Thanks for your call, try again later” or something similar?

I am sick of shit like that. Honestly, fuck these corporations. Rant over.

8 thoughts on “Upset With A Package Deliverer”