Todays question of the Daily Prompt is quite interesting…

As a kid, what did you want to be when you grew up? How close or far are you from that vision?

At that time my friends and me had also those card games that you might know too. The card games that were published with different themes. There were for example card games that contained cards with different cars. I played those card games as a kid with my friends and you could choose a card from your set and then you compared things like cylinder capacity and other values with the car that your friend had chosen. We had some different card themes about ships and what not. Apart from civil aircrafts, I had a card game with military aircrafts as well. We played against each other and compared the aircrafts maximal speed, flying altitude and other values. It was a lot of fun.

Then I had my uncle who was fascinated by RC cars. One day he did take me to the model shop to buy me a RC car too and the box basically contained all components that we had to assemble. My uncle taught me how to assemble the electro parts and so on. The car body was pre-made and the only thing we had to do was to paint it and to put some cool stickers on it. We took our both cars and he showed me a garage and a huge parking place and it was a lot of fun to drive my RC car there and my uncle had his own gasoline model car. Sometimes we damaged our cars and then my uncle and me had to go to the shop again to get new electro or plastic parts.

At that time I also noticed that they sold military aircraft models but I mean the ones that you just assemble and paint later on, to put it in your cabinet as decoration. I was fascinated by military aircrafts as a child as said, and I really wanted to assemble some of the aircrafts. When I remember right, my uncle bought me a Grumman F-14 Tomcat model and we assembled the first one together 1991 I believe. I painted it in desert camouflage as it did fit to the First Gulf War which was an actual conflict at that time. Later I bought my own McDonnell F-4 Phantom II model that I assembled and painted in brown green and a Tornado jet model which I liked because it was also a jet that our German military regularly flew over our German cities.

As I often mentioned on my blog here, I also had computers early in the days when I was a kid. I played a lot of games and also flight simulators. I remember that the first flight simulator I played was a Amiga game that was called Strike Aces or so. I really was excited about this genre and played a lot of flight simulators over the decades and it´s funny how the graphics improved over the time. If you count all I said here together, it´s true, I still know today every single name of any military aircraft (laughing). 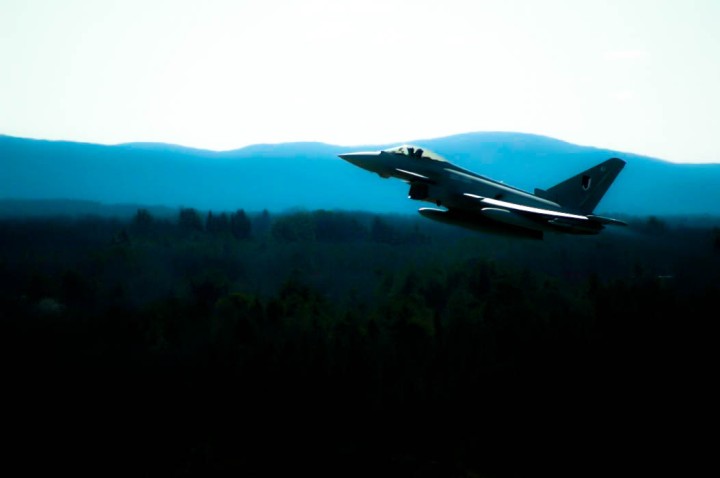 Now all this might not answer the question of the Daily Prompt but I will do this now… the point I want to make is that military aircrafts fascinated me so well as kid that I really had the idea to become fighter pilot for the German airforce. Am I a fighter pilot for the German airforce today? No, this dream never came true. While my military physical examination worked out very well, it was still not enough to become fighter pilot. The requirements to become a fighter pilot are quite high. For frogman´s or navy divers too. But apart from that there were a lot of possibilities open in the Bundeswehr but sadly not my childhood dream. But maybe it was a crazy idea anyway. I think my interests about aircrafts inspired me at that time, that´s all. I am not unhappy that I am not a pilot today, hehe. But I do still think that flying is something cool. Years ago in the holidays, we visited an airfield and a friend and me saw a propeller-driven aircraft and a pilot and we asked him if it´s possible to book a short flight. The pilot answered “Yes, this is why I am here” and I paid him. We flew an hour and the pilot showed me some crazy stuff and it was much crazier than driving in a rollercoaster. When we landed, I told my friend “Now you, it´s a hell of fun!” and then he flew. It was a great experience and I would do this again.

So, flying is maybe not my job today but the dream came true partly because of the mentioned flight and the experience which was a hell of fun. I really understand why so many pilots say that flying is freedom. To be over the clouds or even in the clouds, this is truly stunning, especially in a small but fast propeller-driven aircraft where your head is outside of the plane and where you just wear a mask, goggles and a microphone to talk with the pilot. This was so cool! I enjoyed it so much. This was like a dream.

4 thoughts on “Daily Prompt: Future Past”