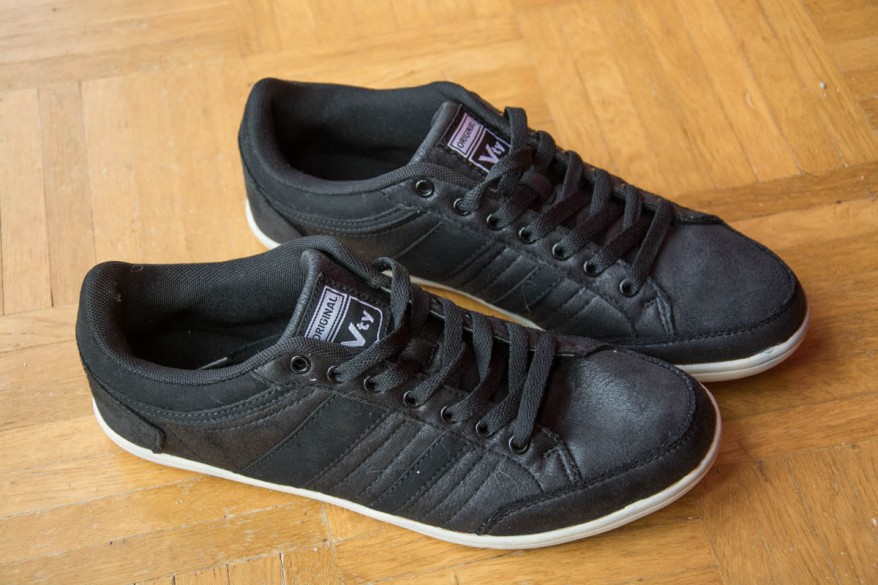 Hilarious, I never thought that this subject would end up as an article series. Everything started September 2014 when I found a pair of shoes in one of the local Deichmann stores here in Germany. That was the first time I purchased them, but they are basically low-budget shoes and as someone who started to hike a lot it was no surprise, they gone kaput almost a year later. I liked the style of the sneakers so much that I purchased them a second time in August 2015.

I am a creature of habit, and sometimes people say that I am at times a stubborn person. Talking about products, it’s maybe visible too, because once I found something that I like, it’s possible that I insist on getting the same stuff again when it’s broken. Here is the problem, around July, I managed it again, same shoes gone kaput again. I still had other shoes to wear but they didn’t give me the feeling to look good in the shoes, nor did my other shoes feel that comfy.

The most logic thought was to purchase my favorite shoes again, because considering that they don’t cost a fortune, I was fine with the proven average one year lifetime (laugh). We have a couple of Deichmann stores in our city, and I was not really shocked when I didn’t find them in the first store I visited. You just have to visit another store, but that’s where I started to realize that I might have a problem, they didn’t have them either. Yes, you get it, we speak about a first world problem here.

In the third store I couldn’t find them either, and now I felt like it would be time to ask the saleswoman close to me. I said with a smile “Look, I have a problem here” and I continued “My favorite shoes are gone, it’s the third store I visit and I couldn’t find them anywhere not even online”. She asked if I could explain how they looked like and I tried my best. Another sales person opened a catalogue of 2016, and the big years number on the front page made me anxious, because it was clear that they have new catalogues every year.

Yes, we couldn’t find them and we went through quite a lot of pages. I just said “Nay” a dozen of times, until they asked if I would know the item number. Since I purchased them already two years in a row, I did take a screenshot of the online product page once to find them again in the store. I didn’t remind myself right away, but then I browsed through my phone and found the image. They got the product number and typed it into the system and said that the article is not listed anymore.

It was clear, it’s now a phase-out model and that’s what they told me. That happened in August, and even afterwards I didn’t want to give up. I thought if it’s a phase-out model, it might be still possible to get them somewhere at the right time, that was my logic as someone who worked in the logistic industry several times. I visited every Deichmann website on the planet, because they do business in several countries, sometimes just under another name. Nope, mission failed.

Meanwhile, I found the shoes two times in a store, just not in my size, but now there was hope. They told me that they can’t order them, they just get the last products and sort them into the shelfs. From now on I was a regular, a very well-known customer in every local Deichmann store. Next I called the companies headquarter via support to tell them my problem since I knew the label is a house own brand, but they couldn’t or maybe even didn’t want to help me either.

I get it, there is this one guy, and he wants you to go all crazy to see if and where the last products will be sent. I was a bit mad when they couldn’t help me either, but at this point I really wondered if there is a bit too much product love or if all the people have been right who told me that I am at times pretty stubborn. It might be ok to be a creature of habit, but with all the craziness related to my favorite shoes, I told myself to grow up and find different shoes.

Walking into a Deichmann store again with my favorite shoes erased from the memory, I couldn’t believe my eyes, in front of me in a shoe rack, my favorite Sneakers but in black? That’s ok! I started to read, touch and open the remaining boxes like a heroin addict would probably prepare the addictive substance, at the same time I paid attention to my environment and showed animal-like protective behaviour.

But when I realized none were in my size, it felt more as if someone just gave me a thousand Euro note to tear it out of my hand and to tell that it was just a prank. Most stories are depressive if they don’t have a happy ending, so let’s finish the story with a good ending. I got the crazy idea to test the remaining pair that was one size smaller than my previous sneakers, and to my surprise the difference was not that big, they just fit. Running to the counter like someone who just had birthday, my mood got another boost when she told me that they are 50% off. This time I got them for around 10 Euro (11 US Dollar) instead of 20 Euro, that’s a deal.

I don’t write long posts about apparel very often, but I thought the story would be hilarious as it shows my insane side. Apart from that, it gave me a reason to do product photography. Additionally, please Heinrich Otto Deichmann, see this as an open letter, I don’t want to have the exact same problem again next year, so show a customer some love and send him all the remaining Vty Original sneakers in the right size if they are discontinued anyway. I am kidding, but a free life-time sneaker arsenal would just be great, and believe it or not, I would probably wear them until I drop dead. But now let me run my remaining pair until they go kaput next year…