Enjoying The Time And The Sunbeams And Getting A Bit Serious 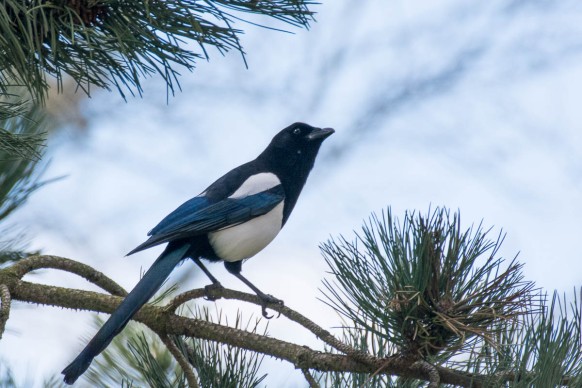 Today I sat on grandma’s balcony with my uncle and we talked together and enjoyed the sunbeams. There is a fir in front of the balcony and I spotted a magpie and shot the photo above. Our conservation was mostly positive because the weather was great, but since he is terminal ill, it is sometimes inevitable that he gets negative thoughts. He mentioned his fear, the fear of not knowing when things get worse. He wondered how many time is still left and that he is aware that this question can’t be answered but that he sometimes can’t get around it. I think he is doing well at the moment, surprisingly well and I told him how glad I am that we can still spend time together. Anyway, you must be careful, only saying this can make someone who is terminal ill think that you don’t take him seriously.

I learned to deal with the whole situation, and I think it’s best to just listen and to agree (which is very easy because I understand the fears), and then you get a chance to remind the person that we still can do things together right now. When we first got confronted with his diagnose, I was afraid he wouldn’t even make a year, but the doctors delayed the worst case well, and my uncle did fight well too. Yes, there are several issues caused by the disease, which is why I absolutely take him seriously, but I strongly believe that a bit of positivity is helpful to delay the worst case even further, because I think our mind can be very powerful too.

It’s ironic, years ago I didn’t have experience with terminal illness, but you really grow into this when someone in your family sadly gets such a bad diagnosis and now I sit together with my uncle who is telling me that he likes it that I always listen to him and that I somehow manage it to convince him that the here and now is more important than the future. He’s sometimes still mixing up words, and he’s always amazed and laughs and says “How are you doing that? So, cool!” when I find the word he is looking for. For “outsiders” it might be difficult sometimes to understand him, but for us family members it’s as if he developed a secret and magic language that only we can understand. I often let him try to find the words, because I think that helps him too, but if he gets impatient, I help out.

After a ten minutes serious talk, he got into a positive mood again and we watched the birds that did land on the fir-tree in front of us. We both agreed, with their ability to fly, they have a lot more freedom compared to us humans. We talked about many other positive things, and my uncle enjoyed to have company.