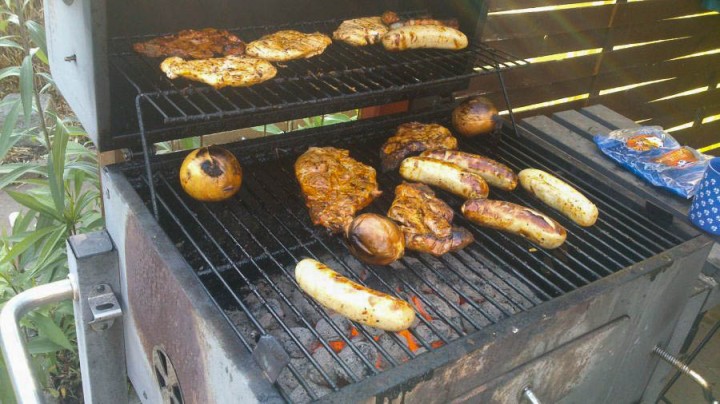 Today it was family time again. We planned a barbecue in the garden again and this time we were quite a lot of people. It was a barbecue for ten people. I like this, especially when there are also family members that I don’t see that often. We had good chats as always and the food was super delicious too, but you wouldn’t expect something else when you hear about barbecue. My grand cousin has a new boyfriend, and he was a guest too. I liked to chat with him, he seems to be a nice guy. I really hope she doesn’t dump him at some point, because I heard her ex-boyfriend was a real asshole. I liked to talk with the new one and my first impression is that this guy is nice. I walked a few meters with my cousin and told her so, but she said something like “Yeah, I know, but he is sometimes too friendly”. Seriously, I heard this so often that I wonder why so many womans like it if the boyfriend does also have something like a “bad boy” side. I told her she should just be happy because “bad boys” don’t cause anything other than trouble.

You know, you would expect that teen girls like bad boys, and that this is just a phase, but this is not the case because there are definitely womans who like them too. I remember when a girlfriend broke up with me, she said something like “The issue is, you’re so nice, and you’re like a best friend not like a boyfriend”. Then I did hang around with one female in the past that I really started to like and I showed that I wanted more but her reply was like “You’re more like a best friend, that’s something I don’t want to damage”. The irony is, we didn’t have to be in a relation to damage our friendship, it just happened a year later anyway. Don’t worry, I didn’t always get dumped on this way, I just tell you these examples because it’s still a riddle to me how some females prefer someone with a bad or dark side. If you ask me, I want my significant other to be like a best friend and more than that. So, if my cousin has a nice guy now, she should be happy. We all have a bad side, and I don’t think you need someone who is more bad than good. It’s just better if you have someone on your side who doesn’t cause trouble, someone you can trust, someone who gets along with your family and friends and so on. I think her new boyfriend did fit well into our circle, especially because he was very friendly.

Talking about the day again, we had a lot of fun as said. Chatting is the most important aspect when family and friends come together. But if you know my blog, I am also into photography and I had a bit of time to find new photo subjects in the garden. I shot photos of a frog that I saw in the pond, I will upload the photo in the future. I did also see a woodpecker on a tree but only once and I didn’t get a second chance to take a photo. The daughter of my cousin was funny again, she wanted to play hide and seek. Sometimes I had to search her after counting to ten, and sometimes she searched me. Because of the barbecue I was still full and felt a bit lazy to continue after we did play about 10 turns of hide and seek, but she really demanded that I continue to play. Of course you do this for a kid, and the reward is the kids smile. I like these summer days, and it’s a bit sad that the summer will soon come to an end. But cold seasons have a beautiful side too, it’s just different.