Love At Third Sight – The Bluesbird

One day I found the Guild Bluesbird guitar in a music store. I wrote about a week ago and I liked almost everything about the guitar, except that the neck was a bit thicker than the guitar I am used to play. I planned to wait because maybe I would find another guitar with a thinner neck but in meantime I wanted to restring my own guitar. I didn’t have new strings at home, but I removed the old ones anyway and started to clean my guitar. That happened yesterday and after my guitar was perfectly cleaned, I decided to visit the music store to get the new guitar strings. I got the strings, but when I am already in the music store, I can also use the time to play on some guitars. The Bluesbird was still there, and this time I tested the guitar with a lot more time. And then it happened after about twenty minutes, my only point of criticism disappeared, the neck of the guitar started to feel very good in my hands.

I mean the neck of that guitar was already playable a week ago, but I didn’t like the fact that it was a bit thicker than the neck of my guitar. To explain this, I’d say the fretboard was very playable, but the neck diameter felt very different compared to my own guitar. But the more I played the Bluesbird, the more I started to like the feel of the neck. I mentioned already in the other article that I pretty much liked the look of the guitar, but the look is not why you buy a guitar. But the tone was simply awesome, and I really liked the built-in pickups, the overall built quality of the guitar. So, now I was sitting there still playing the guitar and my main point of criticism disappeared, I was very surprised and started to absolutely enjoy the guitar.

Since I had not a lot of money with me, the question if I should take it with me didn’t pop up. I could think about this on the way back or sleep a night over the decision. But that thought did escort me on the way back home. I think it was love, because at home I couldn’t resist and opened my piggy bank and took enough money out, because a part of the savings was there to get a new guitar anyway. So what did I wait for? Now with enough money in my purse, I decided to go back to the music store. The sales person who knows me as a customer started to laugh when I entered the store. He said “You’re here again to play the Bluesbird? Is there some kind of relationship building up between you both?” and we both laughed. I played the guitar again, but this time only for ten minutes. I eventually decided to get the guitar and I feel great about this decision, but also bit evil because I did haggle. I’ve never been good at this, but I wanted to try it out since I learned some things about guitar stores. I got a very nice deal and some extras. Here is my new guitar, the Guild Bluesbird Newark St. Collection… 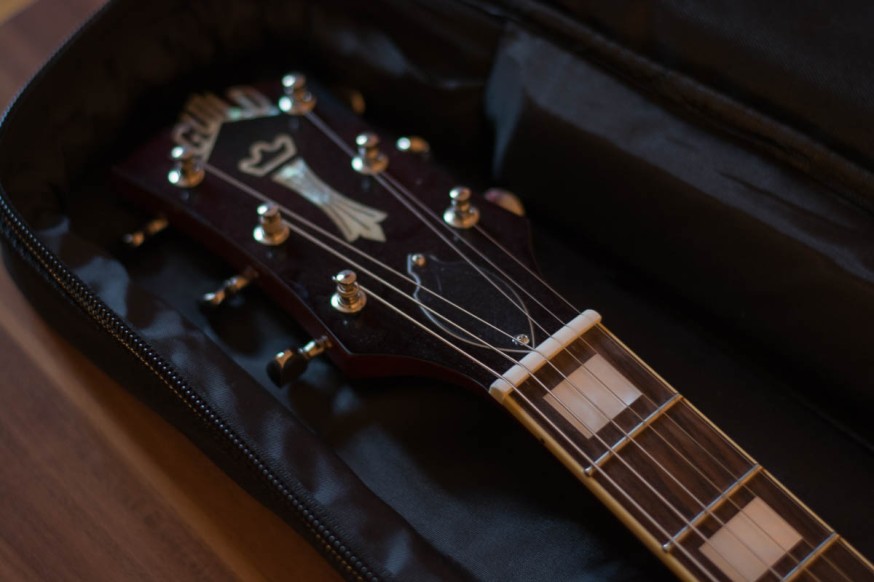