Have you ever heard about GAS (Gear Acquisition Syndrome)? I did it again, I purchased another guitar. It looks like 2018 is my year of the guitars. It’s ironic, because I played for over two decades on one and the same guitar, to be more exact, on my Coxx SD Standard. It’s not a bad guitar, but also not a great one, it just did the job. But when you have so many expensive hobbies at once, it’s a bit difficult to set priorities, although guitars should have had a bigger priority. On the other side, I’ve always been a person that thinks “Don’t double-spend money if you have something that works right now”, which means something like “If you have a guitar, you don’t need a second one”. I believe I was wrong, but more about this later.

Back then when grandpa still had a Fender American Standard Stratocaster from 1974, I liked to play on that thing a lot but he didn’t like his Stratocaster and sold it for another one. I played on many guitars, in shops, the guitars of friends and what not, but I realized early that I am a Stratocaster type of guy. So, it was always planned to get one, but never done. In the family I was known for hoarding money, and as the person that barely spends money unless it is absolutely needed. And I was always stubborn and didn’t want to change the way how I think about money. When I had this topic with my grandma again, who thinks I should treat myself with some things once in a while no matter how expensive the stuff is. I was still arguing that I would like to do it but that some things are way too expensive. But you know what stuck with me? My uncle who got a Glioblastoma diagnosis was present when we talked about this, and at times he could still talk well like on this day, and he said “You know what? You’re playing guitar since two decades, you have for sure a reason to spend some grands on a guitar unless you want to pass the money on when you die”. He said this with a smile. Without knowing how to play a guitar, he also wondered if a new guitar would maybe unleash my interests, eventually making me more creative, because that’s how he felt with his interests and when he got something new.

I am honest, I won’t change my lifestyle on a way that I will spend every cent from now on, but when my terminal ill uncle said this, I started to ask myself “Yeah, why to hell do I have difficulties to spend money?”. I think the answer to this question is that I’ve seen both worlds, because when I was 21 or so, I’ve been a debt-ridden young person. Just many years later I became debt free and financially stable. So, maybe I wanted to prove myself that I am never doing the same mistakes again, and I did that on a way to put almost everything if not all to the side, and I barely treated myself with things. But when my uncle said that to me, I realized that this is as extreme as being debt-ridden. And obviously, when your terminal ill uncle reminds you that money has just value as long as you’re still living, it just sinks in.

Another week I told my uncle that he would be right, but that I think the middle is more perfect. I told him to start using parts of my savings for things I really like. On my tablet I showed him a couple of guitars that I might like. He then said “If you get one of them, I am pretty sure you will be happy and I want to see your smile”, he continued “I also want to hear you playing a song for me”. I wasn’t able to make my promise come true, at least not in time. I cared a lot more about him, being there, and a lot less about my personal materialist wishes, and his mental and physical condition declined fast. He died on February 5, and when I bought my Bluesbird guitar on April 4, I told grandma that the new guitar would be one of the many cases that remind me of him again. She didn’t understand, and when I told her that he really wanted that I’m doing something for my hobby, she remembered the conversation again and said “You’re right, I remember the day we talked with him about this”.

I am sad that he couldn’t see this and many other things anymore, but he was right, because since I have that guitar, I’m playing a lot more and I’m getting a lot more creative. I’m putting a lot more hours into playing my guitars, because I can always switch if I want to hear a different tone, or if I want to feel a different guitar neck in my hands. It was so much fun that I got myself a third guitar in June, my Mexican Standard Fender Telecaster. From then on I started to wonder if I should call it the year of the guitars, because damn yeah, you’re a lot more creative if you can pick one out of several guitars. So, in July I got myself a Vintage V100 Lemon Drop, mainly because I wanted a guitar with out-of-phase pickups, a totally different sound that you might have heard if you know Peter Green guitar solos. Still not completely bankrupt, I started to wonder if I should finally get myself the guitar of the guitars I always wanted, a Fender Stratocaster.

I started to research and thought I would be fine with a Mexican Fender Stratocaster, they’re cheaper than the ones made in America, but like price-conscious guitarists often joke around when you ask them how they differ, the difference is 200 miles (Referring to the distance from Corona in the USA to Ensenada in Mexico). Then I had the chance to play on some Fender guitars, and I liked the Fender Classic Series 50’s Stratocaster a lot and I almost bought one in red. But price-conscious as I am, I looked at the second-hand market and found someone selling a Classic Series 50’s but in the color surf green. Uhh, not really my color, but a week of looking at the photos, I somehow started to like the surf green. Funny, huh? Maybe I’m still a bit greedy, and yes, the price difference compared to a new one was huge. So, one day I woke up and I told myself “Let’s do it, you always wanted a Stratocaster” and I bought that thing. Here we go. Within a year, my guitar collection grew from just one to five guitars. If there is really a heaven, I’m sure my uncle is sitting on a cloud smiling. But I preferred the middle way, I did treat myself with a couple of guitars this year, but I still have reserves that I won’t touch anytime soon. So, that’s maybe the lesson I learned, if you saved a lot, you can also take a piece and get yourself some good stuff. Here is the Fender Classic Series 50’s Stratocaster in surf green… 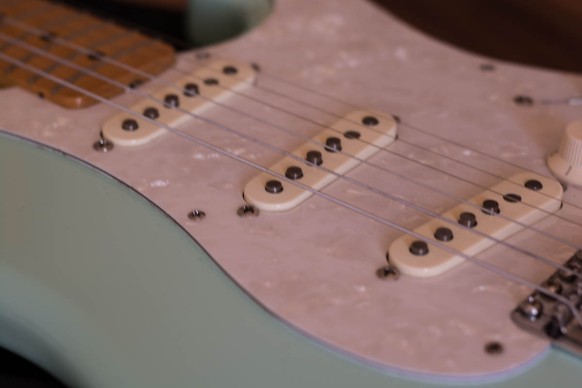 I absolutely love to play my new Stratocaster. It has a small spot of paint damage on the back, but I’ve seen it in the sellers photos too and I didn’t care. I actually love it if guitars are war-torn. Not to mention that it’s just a small spot on the back as you can see in one image. I also got used to the surf green, it’s pretty much a color of the 50`s, and that’s what the guitar is about. I would have liked the 60`s version too, but I think they have the same pickups. The point about both guitars is that you come as close as you can get to the first original Fender guitars. I think it’s enough for this year. I still might be interested in a Gibson Les Paul Studio, but I might do this next year. As I said, I do now totally get it that it makes sense to spend money on your interests, but I still think it’s better if you always have a reserve of money. That’s why I said the middle way is the way to go. Treat yourself, but not on a way that you go insolvent.