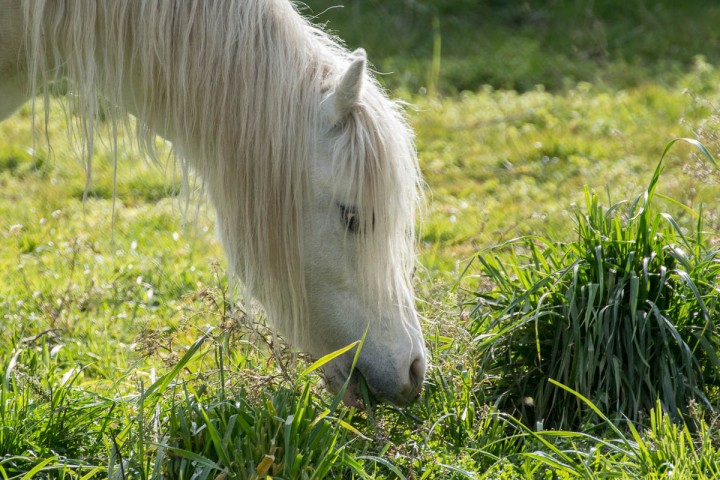 Today we had nice spring weather and after I finished my errands, I thought it would be a nice idea to go out and enjoy the weather, especially after all those days of voluntary quarantine. So, I grabbed my camera bag and started to walk with the sunbeams warming up my neck. I found two cats and even a grey heron but then I saw a paddock with beautiful white horses and decided to take a close-up photo of one. You can see the picture at the top.

But a second after I didn’t look through the viewfinder anymore, I heard a woman yell at me. She yelled “Hey! They are my horses!” and “I didn’t allow you to photograph them”. She was hostile right from the beginning and I replied “Look, you can keep your horses, I am just photographing them and I can assure you that I don’t need your permission”. She replied “Sure, you do!” and while she got louder in her voice, I thought it would be funny to maintain a calm voice and I said, “Nah, I don’t like to repeat myself but I do you a favor and say it again, I don’t need your permission to photograph the horses”. She then screamed “I know my rights!” and I answered, “I don’t think so, so far you just made the impression to be uneducated about the topic”.

Now she was freaking out and screamed “I am going to call the police!” and I remained calm and said, “Do it, I have time and will wait till they’re here” because the reality is that I am well-read about the German laws when it comes to photography, which makes me kinda self-confident in such a debate. So, I really wanted to wait for the police but she didn’t call them. Instead, she now started scream “Go away!” three times in a row, which was funny because it looked like she attempted to summon a ghost or something. But after the third spell, there was a break and I thought it would make sense to point out that I was standing on a public path and that I just can’t go away because someone wants me to. I continued and said, if I go, then just because I find it pointless to discuss with a clueless person and that I run out of patience if she doesn’t call the police right now. That left her speechless and I clearly saw how her brain was overloading.

When she turned her back on me, I shouted with a friendly voice “By the way, your horses a beautiful. Enjoy the sunbeams and have a good day!”. When I continued on my way, I wondered why so many people want to argue about something they never have read about? It isn’t the first time I was battling with this question. But two minutes later, I just realized it’s not worth it to be mad about it because uneducated people are just that, uneducated. I still noticed the warm sunbeams on my neck and the sun helped me to keep the same good mood I had when I went outside.

Anyway, for anyone wondering what the laws in Germany say in this case. It’s easy, if you are standing on a public path and property is open (clear view from the path, like in the case of a paddock), you’re allowed to take a picture of animals on the property with a telelens and the same counts for a tree or whatever subject. While this sounds strange, the German law actually defines animals as objects in this case. It would be very different if it’s clearly visible that the property owner wants a private sphere, like when you see properties without a clear view, for example with large hedges or opaque fences as an example. In these cases, you just can’t grab a ladder to gain view and take a photo of an object. So, basically common sense. It’s also a difference if you take the photo from a public place or from within the property. Even if the property owner allowed you to get on the property, you’re not allowed to take a photo of something there without permission, however, then again, you can from a public path if there is a clear view.

That’s the simple explanation but as you can imagine, there are tons of different cases and due to that, laws are much more complex. The whole subject is also very related to people photograph in Germany, which is a subject on its own. For example, if you not just shooting a photo of animals but if there is a person in the picture as well, you get other issues, namely the issue of infringing personal rights. The same can be the case if a family name is visible and even street names. But hey, when I photograph a horse, I definitely photograph the horse in a way that there are no distracting things in the frame. So, most decent photographers will probably never really be in court because of these special cases, because at the end of the day, most of them don’t want to infringe someone’s privacy but focus on a subject, like in the case of my close-up horse picture.

I am not a lawyer, so, don’t see my post as legal advice. I am just repeating in a simple form what I have read a ton of times elsewhere. Actually, the first thing that came to my mind when I got my first DSLR camera was the question of what I am allowed to do and not allowed to do in Germany. I think we all should read up on photography-related laws or court cases in our own country. And then, when you run into persons who claim to “know their rights”, you can take it easy and say “Yeah, whatever, call the police”. That’s what happened today.

11 thoughts on “Beautiful Horse With A Shitty Owner”