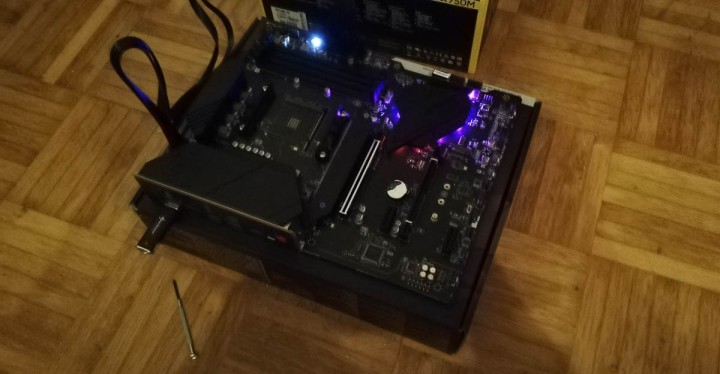 This year I planned to build a new PC and my personal deadline to finish the project is autumn or winter as this is the time where I use computers the most. I bought some of the parts already in spring and continued to purchase individual parts over the span of a half year. I could have done it in one go as my piggy bank is full enough, but I love to hunt for bargains with PC parts and sometimes there are cool special offers, not to mention other price fluctuations. Any way, I might go into detail about this in another post.

For now, I just want to mention that I already have a mainboard beside other parts. It’s the MSI MPG B550 Gaming Plus and I want to pair it with a AMD Ryzen 5600X that I already purchased today as well and it should be delivered this week. The mainboard is compatible with Zen 3 CPU’s but not right off the bat. You need to check if you have to flash the BIOS. I checked the version, which was kinda easy as it is printed on the mainboard between the PCI-E ports. That’s how I found out that I definitely need to flash the BIOS.

But I expected that as I researched carefully what I want to put together. But here is something I want to talk about. Back in the days when you purchased a mainboard that is basically compatible with a new generation of CPU’s after a BIOS flash, you actually had to put a CPU of the previous generation into the mainboard to be able to flash the board. This might sound like it’s not a problem, at least not for those who had a previous generation CPU in the PC anyway but it was a problem for those who didn’t have such a CPU. This did lead to funny situations where people either bought the previous generation CPU, to eventually sell it after the BIOS flash, or they did lend one from a friend (to just update the BIOS, nothing more).

Today it’s very different. Today, some of the modern mainboards have a BIOS flash button. My new mainboard has this too and while it’s not the first time that I flashed a mainboard, today I did this for the first time with this modern feature and it was very practical. It actually couldn’t be easier. All you need is an USB drive, a power supply and mainboard with an USB flash button. You prepare your USB drive by formating it with FAT32, and then you put your BIOS update on the USB drive. You might also need to rename the file, in the case of MSI boards you rename it to “MSI.ROM”. But if you came here to learn how to do it, you’re wrong here, I’m not writing a guide right now, I just share my thoughts on it.

After you prepared you USB drive, you just need to unbox your mainboard and power supply. The fun thing is, the whole process will work with a bare mainboard. You don’t plug any components into your board, meaning, you neither need a CPU, RAM nor a GPU or other things. Just your board and your power supply! You basically just plug the 8-pin connector and the 24-pin power connector of your power supply into the mainboard. Then you plug the USB drive you prepared into the USB port that is labeled as “flash” or something, you turn on your power supply and then you just have to press the BIOS flash button. A light on the mainboard near the flash button will indicate that the BIOS file is transferred.

This is of course the part where you could potentially brick your mainboard, meaning, where things can go wrong badly. It’s the part where you should not power off the board, otherwise you might have a big problem. In my case, I researched what the flash button LED can indicate and found out it’s either stuck at red for a long time or it’s blinking. With my first try, I just saw a stuck red light for a long time and double checked that it meant that the board is not accepting my USB drive. The red light was stuck forever but I learned I just can power off the board in this case. Again, you should not do this if the board actually performs the BIOS update.

But when the LED is just stuck at red for a long time, the mainboard might not accept your USB drive and that’s what happened in my case. So, I was looking for another one and prepared it as well (FAT32 format, copying and renaming the BIOS file). I did put it into the board and this time that USB drive was accepted. This time the USB flash LED blinked and the LED of my USB drive showed data transfer too. But as I have an RGB board, different RGB LED’s were lighting up as well and the fan of the power supply did rotate. This is where patience is needed, I think the flash LED did blink for at least 5 minutes, which means it took some time to update the BIOS.

If you watch the whole spectacle, you definitely will notice when the board is rebooting after the BIOS flash but you still need to wait until the BIOS flash LED stays off entirely. Only then you’re allowed to power off your PSU and thus your mainboard and at that point you can also remove your USB drive. The flash button is really useful. The only thing I don’t understand is why some USB flash drives are not accepted despite being formated as required. But overall, I absolutely liked the whole process.

If nothing went wrong, and I think the indicators showed the second time that everything went right, I should now be able to pair the mainboard with a Zen 3 CPU. It’s kinda funny that it took so long until mainboard manufacturer got the idea to design this BIOS flash button feature. No matter what, I tested it now and I really love it.

One thought on “Preparing A Modern Mainboard”