German History,… Going Through The Forest With Friends,…

My friends and me live in Lübeck as I often wrote. Today was one of the hot summer days and it was so hot in my apartment. The apartment was totally warmed up and I thought it might be hot outside too but there will be more air than in my apartment. I called two friends by phone and asked if they would like to meet each other. One of my friends lives directly near the city and me too but the other friend lives more outside of Lübeck. Our city is in the most northern German federal state called Schleswig-Holstein but the city is not too far away from East Germany and the East German federal state Mecklenburg-Vorpommern. I said one of my friends lives more outside of the city and what I mean is, that he lives less far away from Mecklenburg-Vorpommern than we do. Today I came up with the idea that we visit him to drink a few beers. The headline of this article starts with “German History..” and let me tell why…

He lives directly in front of a forest that is quite big for a Forest in our area. While he still lives in Schleswig-Holstein, the forest that is just hundreds of meters away from him, divides our federal state Schleswig-Holstein with the mentioned East German federal state called Mecklenburg-Vorpommern. To go into the forest, you just need five minutes from his home, but then if you are in the forest you can go and go and there is no end of forest. That was our plan today. We took some beer and went into the forest to talk and to enjoy the nature.

Talking about the both states and the nice forest, we also wanted to find traces of the German east and west division in the history. The borderline, I mean the iron curtain was not too far away from Lübeck and that´s what I am talking about. We always lived in the German Federal Republic but at the time of the iron curtain, the German Democratic Republic (GDR) always has been in direct neighborship with us and just one “brink” away, I´m talking about the forest again that basically was the borderline.

The forest is called Marli-Brandenbaum on the West German side and Palinger Heider, Hohe Meile or Halbinsel Teschow on the East German side if we talk in terms of the iron curtain, or today in terms of the borderline of the both modern German federal states in the north-east. This is what I mean when I talk about German History because today we did something that we could´t have done decades ago because Germany was divides. Today we went into the North German forest part until we reached the East German part of the forest. Today we did cross the border of two German federal states in the north-east and in the past we would have crossed the border of two countries, but it wouldn´t have been possible!

Enough said, now I just want to show you a little part of German history. The photos are snapshots and I can´t show you much, but what I show you, that does have historic relevance we should never forget. We went over an hour directly into the forest and didn´t have much more time as a friend was like a child and complained about all the midges. Also the photo quality is not good as I shot the images with my phone that does not take good pictures in a dark environment like a forest… but then again, the photos are still important. Enough, here is what I mean… 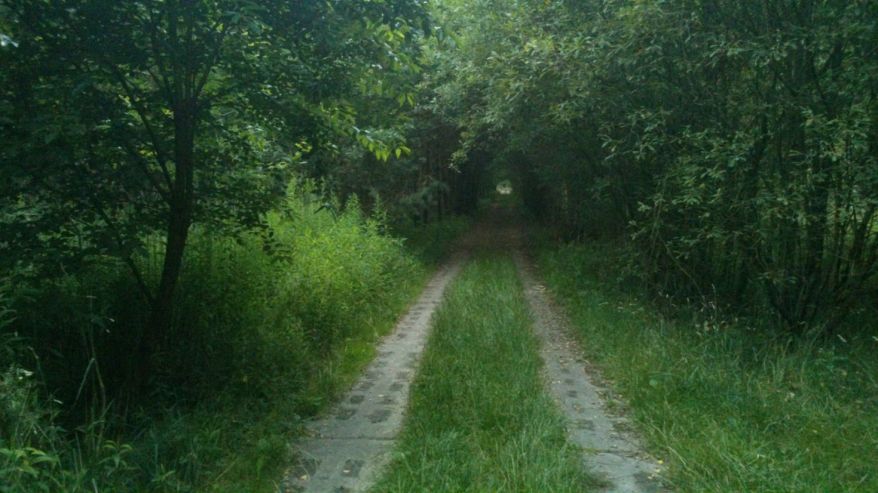 Deep in the forest you find the concrete trail of the image above. This trail was part of the death strip that divided West and East Germany. It was a border monitoring trail of the border police and military of the former GDR. Basically a relict of this time, directly in a forest. It was one part of a much bigger border system, the so-called death strip with all the watch towers, mine fields and barbed wire fences. If you don´t care much about history, you probably say like a friend “It´s just a trail.”. If you care about history like me and another friend, you don´t go further, you wait, you take a deep breathe and feel what this place meant decades ago. By the way, this trail is visible the whole border along that divided Germany, I mean not only in our federal states. It´s a trail for miles and miles, just that nature took most of it back. We call this stripe “Grüne Zone”(in English the Green Zone) today. No matter how dark the History about this trail and the whole border is, nature claimed it back and it´s today one of the most healthy biotope of Germany along the old borders.

On the photo above you can see a memorial stone. It´s a stone about the person called “Siegfried Apportin”. He was skilled painter- and house decorator. Later he became sergeant of the East German People´s Police. At that time, he has been shot to death by a comrade. His comrade Leo Köpke has been convinced by a service of the West to defect. The comrade tried to convince Siegfried Apportin to defect as well but he didn´t want to and got shot to death by his comrade Leo, as I researched when I arrived at home.

As said, it´s sadly not much that I can show because a friend really complained about the forest and it became dark soon. But one other friend and me said that we will visit the forest again because he said that you can find much more stuff there like an old bunker and other border remains. We said that we will meet each other one morning to have a breakfast and then we will go much deeper into the forest as we will have more time from the morning on. Just not sure when we will do this but we talked already about it. You can find much more there than just the mentioned trail, if you one of your friends is not a sissy who has problems with midges (laughing).

Anyway, here are some other forest snapshots that are not related to history but shot in the same forest. Also bad quality but still shows the beautiful forest there… 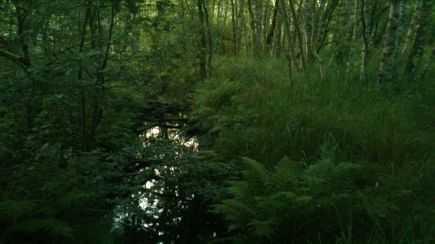 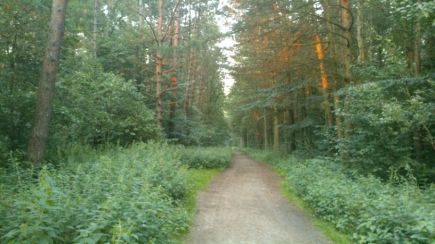 Let´s see if I will get some better photos of this place in the future. I will try some day.