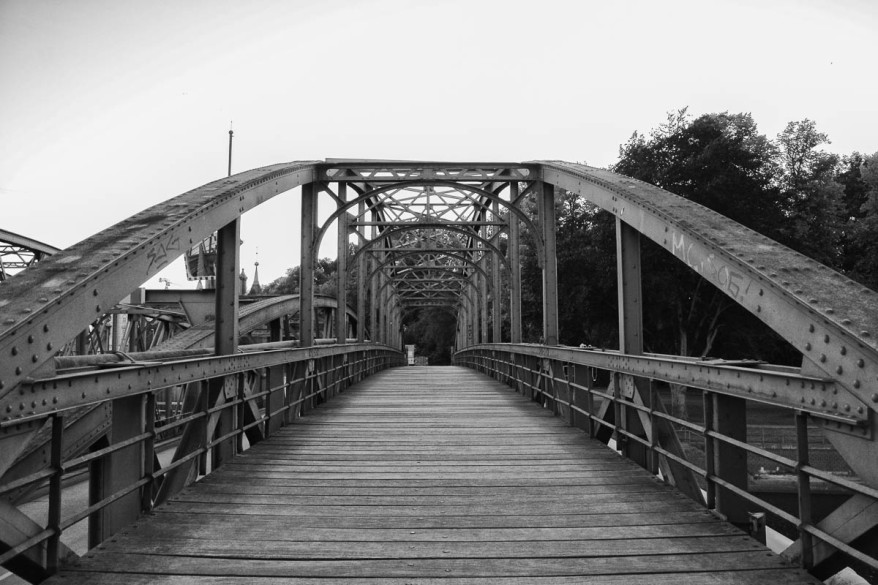 I can’t tell you how often I walked over the footbridge in the image above. It must have been hundreds of times. Around the time when me and my friends were 20 years old, we did party hard. Every weekend and I don’t think we skipped one. We usually started at someones home, getting a couple of drinks but later we always went into a club. It was important to get to a decent level of drunkenness before we went into the club, because from that point on drinks would cost a lot more. So, it started at someones home, and on the way to the club. We usually walked to the club, and it took about an hour or less, depending on how fast we walked and what we experienced on the way. The bridge in the picture was basically the last landmark on our way, because from that point it was only 5 minutes to the club.

It’s not that we didn’t have money for a taxi, but we did rather spend it on drinks in the club. Apart from that we really liked the way to the club, because it was great to chat with the mates, and there was always a bit of shenanigans going on. We also met other strangers and flirted with womans. It happened quite a few times that someone got a new girlfriend on the way to the club (laugh). That’s far more interesting than taking the taxi. It became a tradition back then, like taking the first drinks with friends at home and making the plan, and then the most interesting part, hitting the road. The club was interesting too, but since music is quite loud in a club, it’s more about dancing and taking drinks. Chatting was possible, but you had to scream in front of someones ear. So, yeah, I think the way to the club was the most interesting part in my opinion.

The way back was usually more difficult. Most of us still didn’t want to pay for a taxi. We usually stayed until the club closed, and that was depending on the day usually between 6 and 8 AM. And since we were young and wanted to live the party life, it also meant being quite a bit sozzled. Even today that bridge still reminds me of zigzag walking. But hey, we were young (laugh). To be honest, two decades later I prefer my healthier life. Once in a while I still take a drink, but now it’s one or two beer every few months and not a night out with heavy drinking. But there is something I miss about this. Not the activity, but the mindset. We were young and didn’t feel any responsibilities, it was a pretty naive life but in a positive way. In a way we’ve still been kids, just 20 years old kids. Problems were still far away, and if there were any, we didn’t notice because we had way too much fun or because we’ve been young and naive.

I don’t think that I felt adult with 18, also not with 20, and I think maturity came step by step. But now, if I look back, I certainly see how I matured. It’s all good, because when you grow up, you will also improve your life over time based on what you have experienced. But sometimes it’s still fun to look back to the naive childhood, teenage or the first years of adulthood. I think what we adults definitely lose over time is the naivety. As said, it is good because the less naive you are, the more you will open your eyes for things you need to do, and things you need to stop doing or things you need to improve. But the bad thing about this is that you also become more worried about different things the older you get. So, it would probably be wise to preserve a bit of naivety, but that’s easier said than done. We had this topic quite a few times in our circles over the last years and we made jokes about ourselves like “Maybe we’re in a midlife-crisis”. But the truth is, I personally accept getting older, it’s just that I like to remember back and see how things changed.

I don’t regret the party life in my younger years, but I don’t want to repeat that either. But I definitely miss the carefree feeling of that time. But the same could be said about my teenage years or childhood.