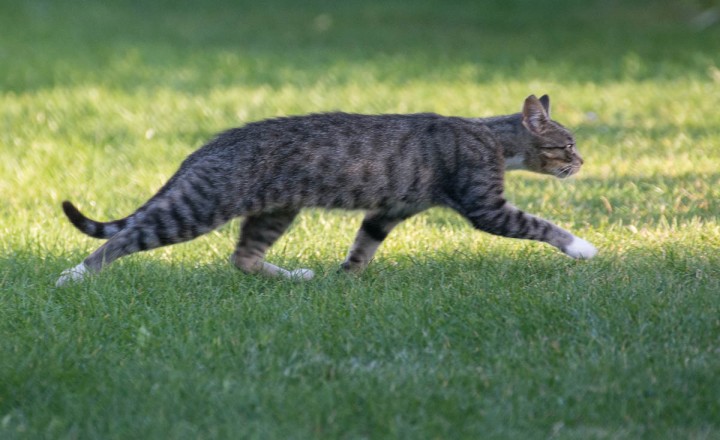 Some days ago I shot some photos of the cat you see at the top. It was friendly enough to let me take some photos. But when I attempted to get a bit closer, it ran away. I pressed the shutter button and took the photo you see here in this post. It was quite unsharp but I managed it to fix it a little bit in Lightroom but it’s still not the sharpest image. Anyway, I like it because it shows a energetic and agile cat. It’s highgly likely that it is the same cat I showed you in another post. I shot the photo at the same place and it seems this cat is frequenting the same garden alley regularly.

It seems to hunt insects or birds there. Of course it does, but I say that because the cat doesn’t pay much attention to me unless I get too close and it often runs behind things along the hedges. By the way, I think I need to practice taking better action shots. If something happens, I am always too slow to watch through the viewfinder. Tracking cats at around 300mm isn’t very easy either. I don’t want to say that the image in this post is bad but you can’t believe how many shots I already missed. But maybe I shouldn’t be that hard with myself, it’s really hard to predict when a cat jumps or runs.

Also, I often use just a single AF point to focus precisely. While multiple AF-area points would help me to track something better, it’s often annoying when the camera can’t decide where to focus if there is something else in the scene (branches of a tree, plants or any other things) beside the subject you want to photograph. That’s why I have my camera always set to a single AF area. Recently I started to practice switching AF areas faster but since things can happen quickly, you probably can’t do that fast enough. The best thing is probably to know what type of photos you want to take and set up your camera accordingly, but I am not that type of guy and prefer to take photos of whatever good things come in front of my lens and a single AF point gives me the most control about the focus.

One thought on “Tabby In Action”