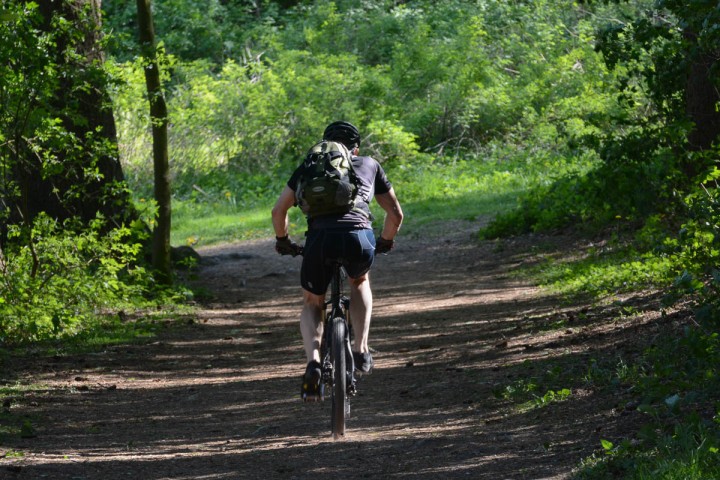 Here is a random photo of a person doing his fitness regime on a bike. I saw many cyclists during my time in Reinfeld. No wonder, it’s a nice place with beautiful nature and great for many outdoor activities. As I mentioned in the past, it’s a bit difficult to do people photography in Germany but sometimes I take people’s photos anyway, mostly in a way that I don’t invade their privacy. That does mean I don’t take photos of their faces unless they give me permission. Exceptions are also if I photograph public places and people are in the scene because it’s my right to take photos of public places or public things. By the way, like many Germans, I’d be super upset too if anyone would take a photo of my face without asking me. That’s how it is here.

Talking about bikes again. Last year I went down to the basement and tried to repair my mountain bike but it was a super old one and it had so many issues that I decided to throw it away. I didn’t think much about it, until this year when I got the idea to cycle again. For a moment I wondered if it was the right decision but there was a reason I threw it away with the bulk trash. Before I spend too much on parts, I rather save the money and purchase a new one or a used one. But it was autumn when I got the idea to cycle again, which means it didn’t make sense to me to get a new bike this year. I might take a look next year but I don’t want to spend too much money as I won’t cycle much anyway. I think I enjoy running and swimming more.

Last week, a friend offered me to use his second bike as he would like to do a longer bike tour with someone but I don’t know, even if it’s a friend, I generally don’t like to use the stuff of other people. I suggested waiting till next year as it is autumn and as I’d like to get my own bike first. I do a lot of running and swimming exercises regularly now but when I heard he wanted to cycle at least 40 km, I was not sure either if I could keep up with him. We’re talking about different kinds of exercises and I know he’s cycling a lot while I did barely cycle the last years. His suggestion was friendly and he wasn’t mad when I denied the offer. So, maybe next year if I am in the mood to spend money on a bike.