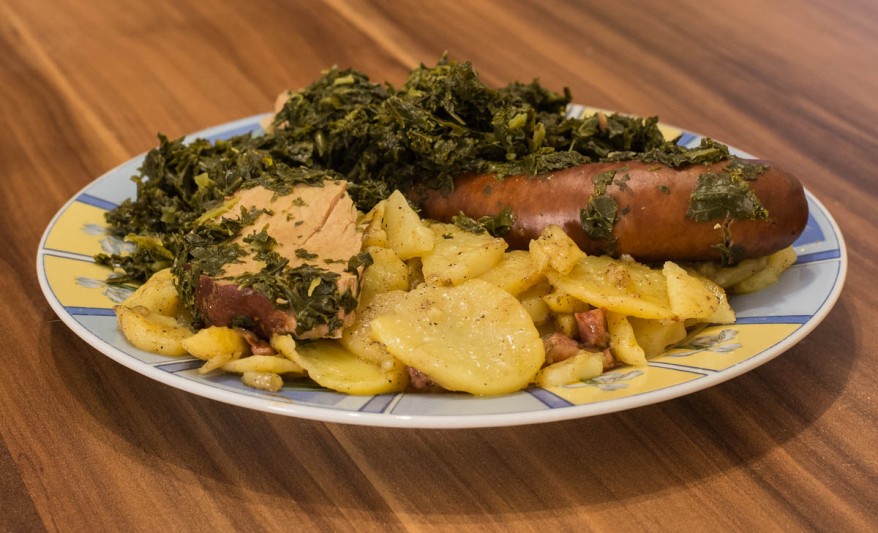 At the top, you see a photo of a very classical and traditional Northern German dish. It’s kale with fried potatoes, smoked pork chop, and smoked sausage. I’d argue if you ever been to Northern Germany during the cold days but didn’t eat “Grünkohl” (kale) as we call it, you absolutely didn’t experience Northern Germany. But as said, it’s a dish you’re more likely to find during the autumn and winter months here, that’s what we call “Grünkohlsaison” (kale season). That’s because back in the days if you wanted fresh kale, you got it from autumn to March. Temperatures down to -10°C won’t harm kale, it’s rather that cold temperatures will slow down the metabolism processes of the kale plant, thus the sugar level in the leaves will increase, which will make it more aromatic.

So, that’s probably why autumn and winter is still the season to eat it. Of course, today you can get it in cans or bottles during the whole year but the regional tradition to only eat it during autumn or winter remained. There are also a couple of different variations in Northern Germany but here in Schleswig-Holstein, it’s usually served with cooked or fried potatoes, smoked pork chop and smoked sausage (Mettwurst). I shot the photo in this post because my grandma cooked too much kale and asked if I’d like to take something home and warm it up later. As I still had potatoes at home, this was a really good idea. So, I warmed it up and didn’t forget to take a photo. And yes, it was super delicious!