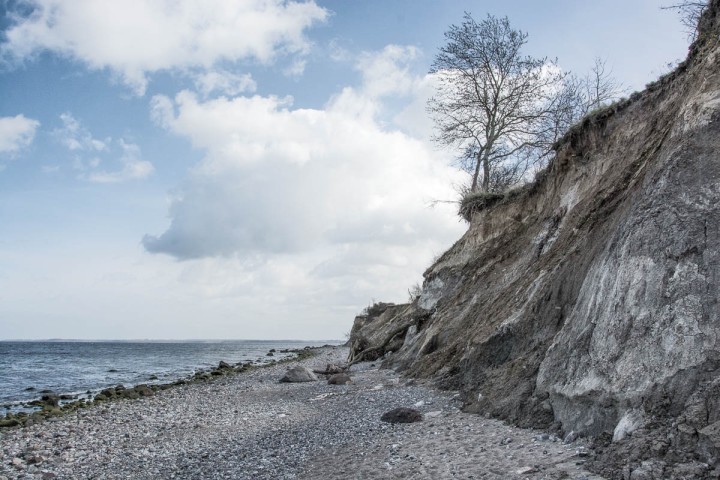 Outside of the city Lübeck, we have a very beautiful place called the Brodtener Ufer (Brodten shore, Brodten steep coast). It’s a 4 km (2.5 miles) stretched steep coast that is part of the Lübeck bay. The steep coast is located between Lübeck-Travemünde and Niendorf near the small village called Brodten. Back then when I was in my twenties, I often visited the place with my friends in the evening on weekends. There was this one spot where people did make campfires, that’s what we did too. Nice memories, having the campfire warm up my face, my girlfriend on my side, a beer in the hand with friends around me that enjoyed the place as well. I played on my acoustic guitar and met people who played other instruments like bongo drums, or those who could sing.

It was dangerous, but as young people do stupid things, we did go swim in the Baltic Sea at night in the dark and intoxicated. I still remember how a friend shocked us while we swam far away from the beach, he submerged into the sea and it took a very long time until he came up again. For a moment we all thought he drowned, but he just tricked us to believe that and laughed about us after he came back to the surface. We didn’t find this funny and he agreed that it was a stupid joke so that we did forgive him. It was a very relaxing place, we did either hang around with the other friends at the campfire, or me and my girlfriend walked away from there to have romantic moments together, and other couples seemed to enjoy the time out from the party too.

Sometimes there was also drama, even at beautiful places. One morning, near the almost burned-out fire, a totally stoned stranger from a neighboring campfire started to make trouble with one of my friends. I told the stranger he should calm down but then he threatened to damage my guitar if I wouldn’t shut up. One of my friends got up and told him that he would eat sand if he’d come over here. Two of them did stand up and came closer, but my friend did hit one of them in the face when he came too close and that stranger now sat dreamy in the sand. The other guy now looked like frozen and dropped his glass hookah in the sand, and I couldn’t stop myself to destroy it with my feet and said that’s what happens if you want to damage guitars and the whole issue was solved before it started.

We never went there to make trouble but we had this clear rule (that did count everywhere), if someone would get too close with the intention to beat one of us, we considered a preventative strike (laugh) if the signals were too clear. However, as said, most of the time it was a place where young people came together, where new friendships were made and where different people had fun together. I did especially like the fact that I could meet other musicians there, it was really interesting to make music together because everyone has the own music-style, and playing together the results can be very interesting. So, in my memories, the place is pretty much about making music, old friends and ex-girlfriends. I never hiked along the whole steep coast back then, that’s something I did much later.