Today We Had A Heavy And Destructive Thunderstorm in Northern Germany

We had real heavy storm in Northern Germany today. I thought the storm was heavy in our federal state Schleswig-Holstein but then I saw the news about the neighboring federal state Mecklenburg-Vorpommern, there was total destruction in some towns. We had more luck in Schleswig-Holstein, but it was very unusual and scary anyway. They said in the news that it was a tropical thunderstorm.

I was sitting in my living room and watched out of the windows and wrote my mother a small message like “Do you see the clouds? Looks like the end of world”. She replied “Yea, pretty scary dark”. About two minutes later rain started, to be honest, it was like a rain explosion because from one second to the other a full-blown shower started.

It was not a usual shower. I don’t know how to explain this, from one second to the other I couldn’t watch out of the window anymore, I just saw water, like sitting behind a waterfall. The noise alone was scary, but it was more frightening that my windows were still in tilt position and it looked as if they would not withstand the storm and rain.

My mother and her husband drove with the car after the storm because they wanted to buy some stuff for the garden in a local building and supplies store. She did send me some photos from underway. She said there were a lot of trees on the streets, and there was a lot of damage in the store they visited. 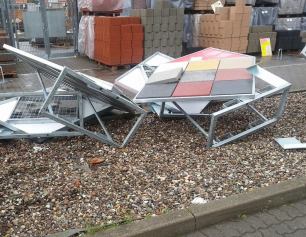 So, there was destruction due to the storm in our city Lübeck and in our federal state Schleswig-Holstein, but also in Hamburg, the storm did even roofs were torn away there as you can see in the Tweet below.

Someone also took a photo when the storm arrived near Hamburg harbor. The scary dark clouds, that is how it looked like in Lübeck as well before the heavy shower started. Below you can see a Tweet with a photo from Hamburg.

But Mecklenburg-Vorpommern got it harder than Hamburg and Schleswig-Holstein. The town Bützow in Mecklenburg-Vorpommern was hit by a tornado and the whole town looks destroyed as you see if you click on the following Twitter link. To be honest, it really rather looks like a photo from a war. The Tweet below shows how the town got hit by the tornado.

Also someone recorded a video of the tornado near Rampe in Mecklenburg-Vorpommern. Looks like the tornado was forming to become bigger, I am not sure if it was the same that destroyed the town Bützow, maybe there were several tornado’s, I don’t know.

To be honest, years ago I didn’t believe much in the climate change, you probably even can find posts on my blog where I denied it. But since the last one or two years I do believe in it. I am 33 years old and of course we had some thunderstorms in Northern Germany where I live, but over the last years they do come more often, they do come with much more destruction.

Also the strange weather changes, we had for example extremely sunny days but also days cold like winter over the last weeks, and then autumn style weather and spring weather too, everything in the same month. And this is now happening often, it’s extremely strange weather. I don’t know, I think there is really something going on with the climate, I believe it will become even more turbulent over the next decades, it’s scary.